Hello lovely individuals, I hope everyone is doing well, is fantastic, and is smiling more than usual. In this blog we shall discuss a very interesting term used to build many models in the Data science industry as well as the cyber security industry.

Random forest is a form of Supervised Machine Learning Algorithm that operates on the majority rule. For example, if we have a number of different algorithms working on the same issue but producing different answers, the majority of the findings are taken into account. Random forests, also known as random selection forests, are an ensemble learning approach for classification, regression, and other problems that works by generating a jumble of decision trees during training.

When it comes to regression and classification, random forest can handle both categorical and continuous variable data sets. It typically helps us outperform other algorithms and overcome challenges like overfitting and the curse of dimensionality.

Uncle John wants to see a doctor for his acute abdominal discomfort, so he goes to his pals for recommendations on the top doctors in town. After consulting with a number of friends and family members, Atlas chooses to visit the doctor who received the highest recommendations.

So, what does this mean? The same is true for random forests. It builds decision trees from several samples and utilises their majority vote for classification and average for regression.

HOW BIAS AND VARIANCE AFFECTS THE ALGORITHM?

We would like to minimise each of these. But, unfortunately we can’t do this independently, since there is a trade-off 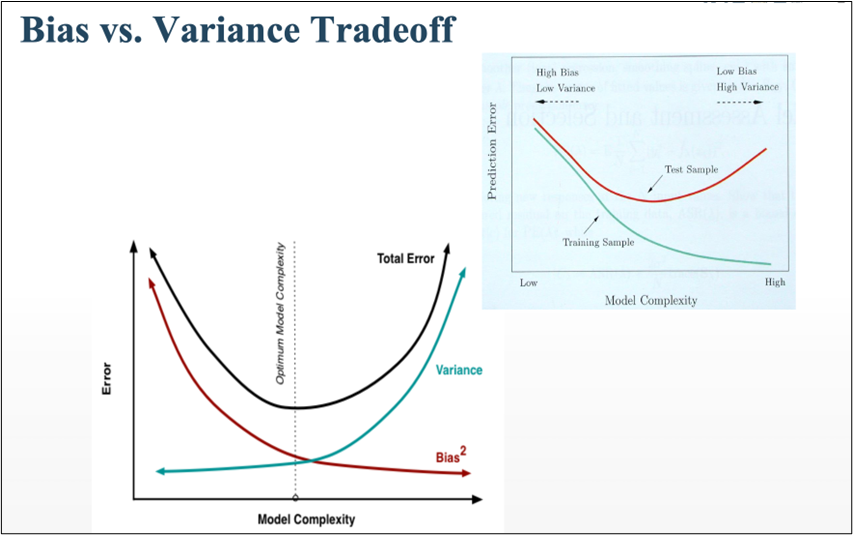 HOW IS IT DIFFERENT FROM OTHER TWO ALGORITHMS?

Every other data dimensionality reduction method, such as missing value ratio and principal component analysis, must be built from the scratch, but the best thing about random forest is that it comes with built-in features and is a tree-based model that uses a combination of decision trees for non-linear data classification and regression.

Without wasting much time, let’s move to the main part where we’ll discuss the working of RANDOM FOREST:

As we saw in the analogy, RANDOM FOREST operates on the basis of ensemble technique; however, what precisely does ensemble technique mean? It’s actually rather straightforward. Ensemble simply refers to the combination of numerous models. As a result, rather than a single model, a group of models is utilised to create predictions. 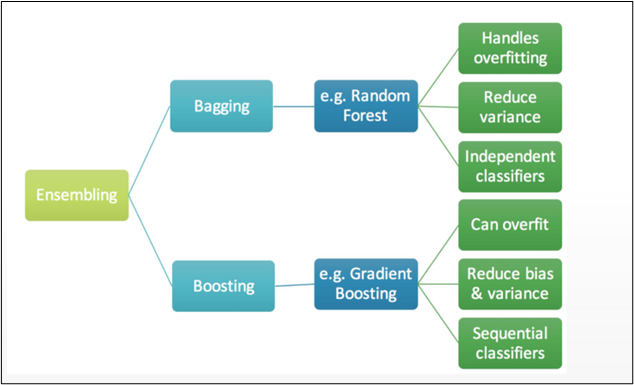 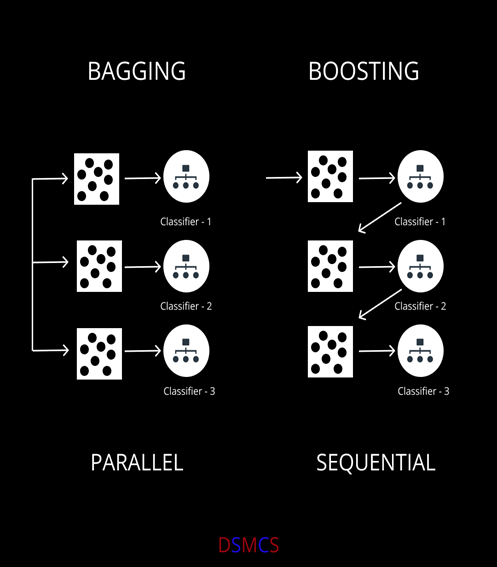 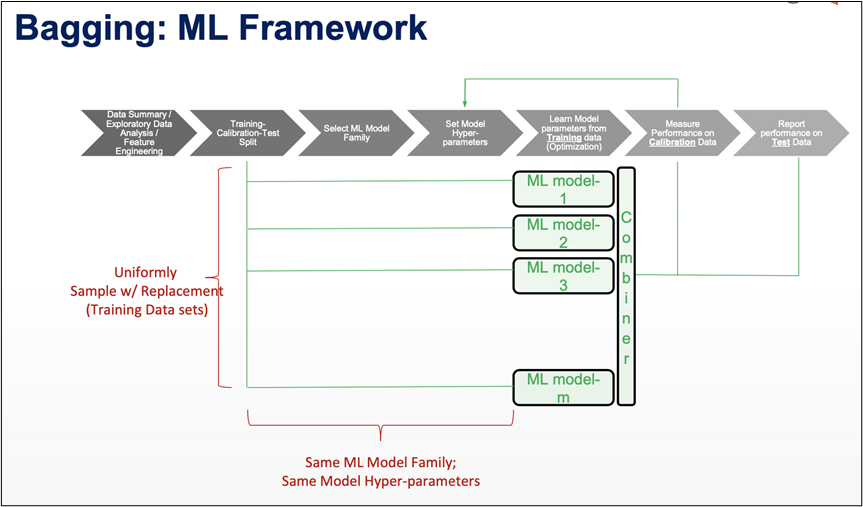 LET’S UNDERSTAND IT THROUGH A BETTER VIEW: 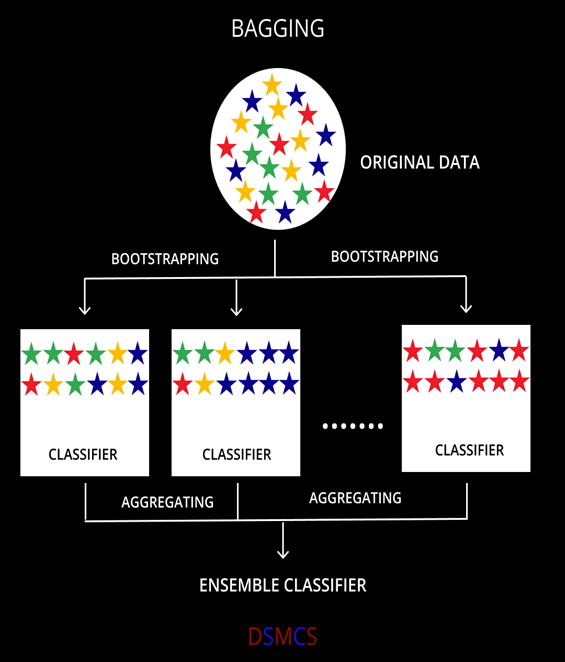 Bagging simply helps us to reduce the variance in a loud datasets. It works on an ensemble technique.

SUMMING IT ALL UP:

We can even calculate  the error from this thing know as random forest OOB error:

▪ From each bootstrapped sample, 1/3rd of it is kept aside as “Test”

▪ No need for separate cross validation 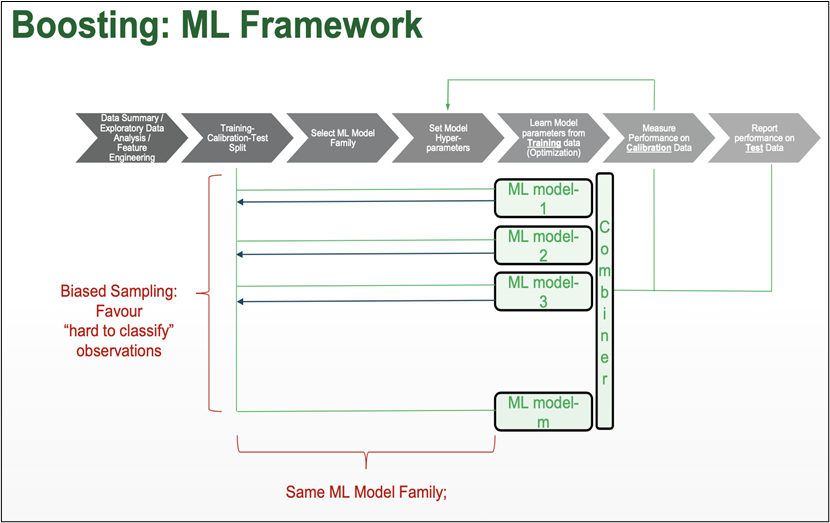 Boosting in short helps us to improve our prediction by reducing error in predictive data analysis.

Weak Learner: only needs to generate a hypothesis with a training accuracy greater than 0.5, i.e., < 50% error over any distribution.

BOOSTING is classified into two types: 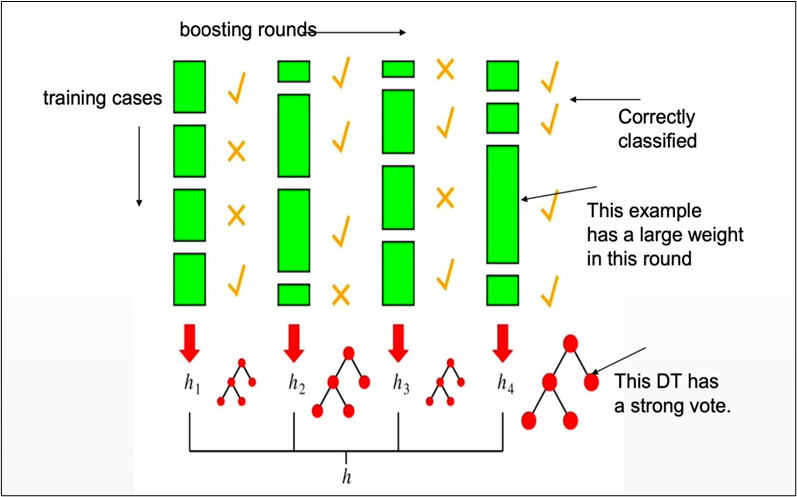 As far as the Random forest is concerned it is said that it follows the bagging method, not a boosting method. As the name implies, boosting involves learning from others, which in turn increases learning. Random forests have trees that run in parallel. While creating the trees, there is no interaction between them.

Boosting helps us reduce the error by decreasing the bias whereas, on other hand, Bagging is a manner to decrease the variance within the prediction with the aid of generating additional information for schooling from the dataset using mixtures with repetitions to provide multi-sets of the original information. 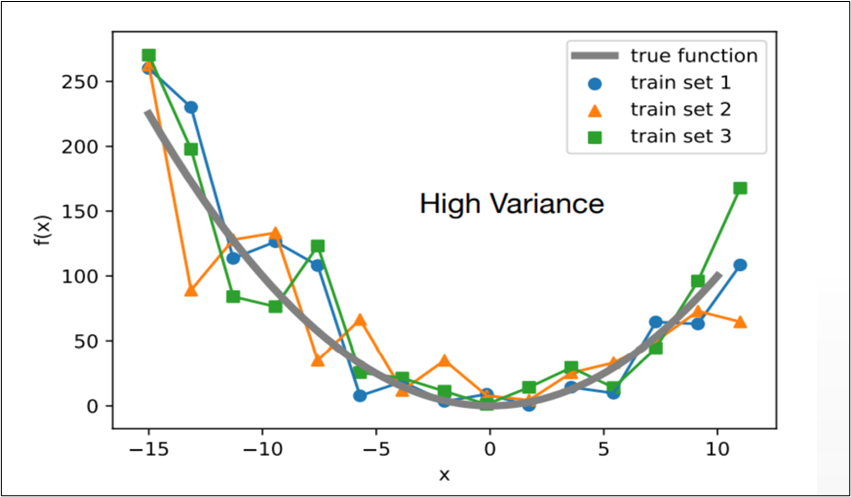 How Bagging helps with variance – A Simple Example

▪ Each time a tree is split due to a variable m, Gini impurity index of the parent node is higher than that of the child nodes

▪ Adding up all Gini index decreases due to variable m over all trees in the forest, gives a measure of variable importance

FEATURES THAT IMPROVE THE MODEL’S PREDICTIONS and SPEED :

Increasing max features often increases model performance since each node now has a greater number of alternatives to examine.

If you’ve ever designed a decision tree, you’ll understand the significance of the minimal sample leaf size. A leaf is the decision tree’s last node. A smaller leaf increases the likelihood of the model collecting noise in train data.

This option instructs the engine on how many processors it is permitted to utilise.

This argument makes it simple to duplicate a solution. If given the same parameters and training data, a definite value of random state will always provide the same results.

A random forest cross validation approach is used here. It is similar to the leave one out validation procedure, except it is significantly faster.

Step2: Choose m<p (p is the number of total features) —number of features used to calculate the best split at each node (typically 30% for regression, sqrt(p) for classification)

Step3: For each tree, choose a training set by choosing N times (N is the number of training examples) with replacement from the training set

Step4: For each node, calculate the best split, Fully grown and not pruned.

Step5: Use majority voting among all the trees

Following is a full case study and implementation of all the principles we just covered, in the form of a jupyter notebook including every concept and all you ever wanted to know about RANDOM FOREST.

In PowerBI, there is no direct or functional mechanism to adjust the visibility (Show/Hide) of visualizations based on filter choices. There is, however, a workaround that enables us to show/hide visuals based on filter condition.

The fundamental concept behind this technique is to apply a mask to a visual and change its opacity based on a condition or filter selection.

I have detail table of orders. These orders are divided into Consumer, Home Office, and Corporation categories. I use segment as a filter. One of the requirements is to present a table of detail if the overall profit for the selected segment is less than $100,000. To do this, this task will be divided into two major parts. First, we will display the table if the filter is selected. Next, we will add a condition to the table.

Step 2 : Add a condition to the solution 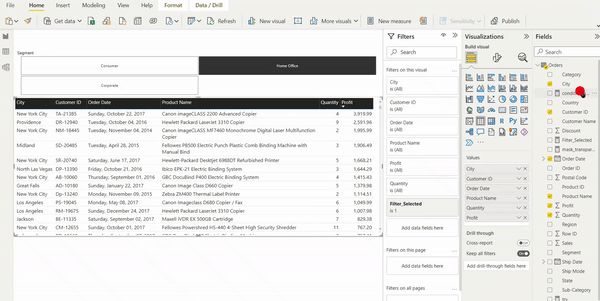 You can now display or hide visuals based on slicer selection and condition. If you know a better way to do this, please comment and let me know. For this article, I referred to this page.

Big data is frequently discussed across many industries by more than just business owners, CEOs or IT managers. Big data and big data analytics are two critical elements of modern business that company leaders and their employees should understand if they want to make more informed decisions.

In addition to the highly data-driven business landscape, people’s needs and expectations are changing. Companies with superb customer service gain a competitive advantage over competitors with poor operations.

The power of big data analytics helps organizations take steps to improve their customer service offerings, ultimately meeting or exceeding the needs and expectations of existing and potential clients.

An Overview of Big Data

What exactly is big data and how is it different from traditional data?

Here are the “five Vs,” or essential qualities, that accurately describe big data:

Businesses that leverage big data can address or even prevent a range of problems that would otherwise be more challenging to solve.

After analyzing big data, gathering new insights on company operations and other critical business issues helps companies overcome existing problems. Some of these might be costly and cause potential obstacles.

For example, organizations can review customer data and adjust their current sales or marketing strategies to increase loyalty and satisfaction. Big data can also highlight changes in client sentiment and predict future trends.

Monitoring employee performance is essential for most companies. Thankfully, big data analysis can show leaders how individual workers perform and measure their productivity.

Big data can analyze important factors such as absenteeism rates, number of sick days taken, workload and output. Once this information is collected, supervisors can relay findings to employees and make improvements to bolster productivity.

Other benefits exist, but these two examples provide a glimpse into the world of big data and how transformative it is in the modern business world.

How to Use Big Data to Improve Customer Service

There are a few ways businesses can harness big data analytics to gain insights and take actionable steps to improve their customer service offerings. Here’s how.

Contacting a customer service center is often time-consuming and headache-inducing for a consumer, especially when the representative cannot answer a question or solve a problem.

Lack of effectiveness and speed are two of the most common causes of customer service frustration. Qualitative and quantitative big data analytics let customer service employees identify their weaknesses, such as their familiarity with a product or service, and take action accordingly.

For example, a representative can spend more time learning about customers’ most common issues while using a specific product, allowing them to solve problems faster and more effectively.

A business can achieve significant revenue growth by aligning customer behaviors and marketing messages. Personalized offerings are becoming increasingly popular among consumers. In other words, people want companies to see them as individuals rather than a source of profit.

Big data analytics helps organizations increase the number and quality of personalized offerings. For example, analytics can reveal critical customer information, like how much money they spend, what products they buy and which services they use.

These details help employees create and automate personalized marketing offers. Customer service representatives can also use this data to make recommendations based on buyer preferences, improving the experience and building loyalty.

Big data analytics are a major boon to customer service representatives. These employees are considered the face of the company, meaning they must have access to all the resources they need. Insights from big data are no exception.

Representatives working with results from big data analysis are in a better position to respond to inquiries more quickly and provide effective customer solutions. They will likely perform well if they have insights at their disposal.

Data is becoming increasingly important for companies in today’s competitive business environment. The role of big data will continue to grow as more organizations recognize its positive impact on customer service and satisfaction.